The present monarch, Queen Margrethe II, has reigned since 14 January 1972. She, along with her husband Henrik, Prince Consort of Denmark, and other members of the Danish Royal Family undertakes various official, ceremonial and representational duties. As a constitutional monarch, the Queen is limited to non-partisan, ceremonial functions. The ultimate executive authority over the government of Denmark is still by and through the monarch’s royal reserve powers; in practice these powers are only used according to laws enacted in Parliament or within the constraints of convention.

Frederik, Crown Prince of Denmark, is the elder son of Queen Margrethe II and Henrik, the Prince Consort. When Crown Prince Frederik becomes king, as he is expected to, he will be counted in English as Frederick X of Denmark.
In the Council of State on 8 October 2003, Queen Margrethe gave her consent to the marriage of Crown Prince Frederik to Mary Elizabeth Donaldson, an Australian marketing consultant whom the prince met when he was attending the Sydney Olympics in 2000. The wedding took place on 14 May 2004 at Copenhagen Cathedral, Copenhagen.
On 25 April 2005 the Danish royal court announced that Crown Princess Mary was pregnant with the couple’s first child, and on 15 October 2005 she gave birth to a Prince. As it is a tradition in the Royal House that kings are named either Frederik or Christian, the baby was baptized Prince Christian Valdemar Henri John on 21 January 2006.
On 26 October 2006, the Danish court announced that the Crown Princess was pregnant with her second child. On 21 April 2007, The Crown Princess gave birth to a baby daughter at Copenhagen University Hospital, the first Danish princess born since 1946. The Crown Prince was at his wife’s side the entire time. Their daughter was christened Princess Isabella Henrietta Ingrid Margrethe on 1 July 2007.
On 6 August the Danish Court announced the Crown Couple are expecting twins which are due in January 2011. 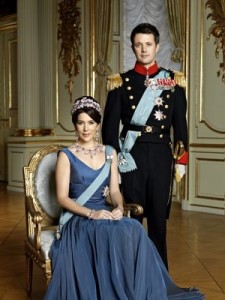 For more information on todays Royal activities and their castles click www.kongehuset.dk

The Danish Monarchy is over 1000 years old, making it the second oldest continual monarchy in the world still existing today. The first monarch in the monarchy can be traced back to is Gorm the Old (d. 958 ac). Originally the monarchy was elective, but in practice the eldest son of the reigning monarch was elected. Later a Coronation Charter was signed by the king to restrict the powers of the Danish monarch. Absolutism was reintroduced in 1660–1661, when the elective monarchy was transformed into a hereditary monarchy. Male primogeniture succession was laid down in law in the Royal Decree of 1665. On 5 June 1849 the constitution was altered to create a constitutional monarchy for Denmark. The Act of Succession of 27 March 1953 introduced the possibility of female succession, which enabled the current reigning Queen, Magrethe II, to accede the throne.